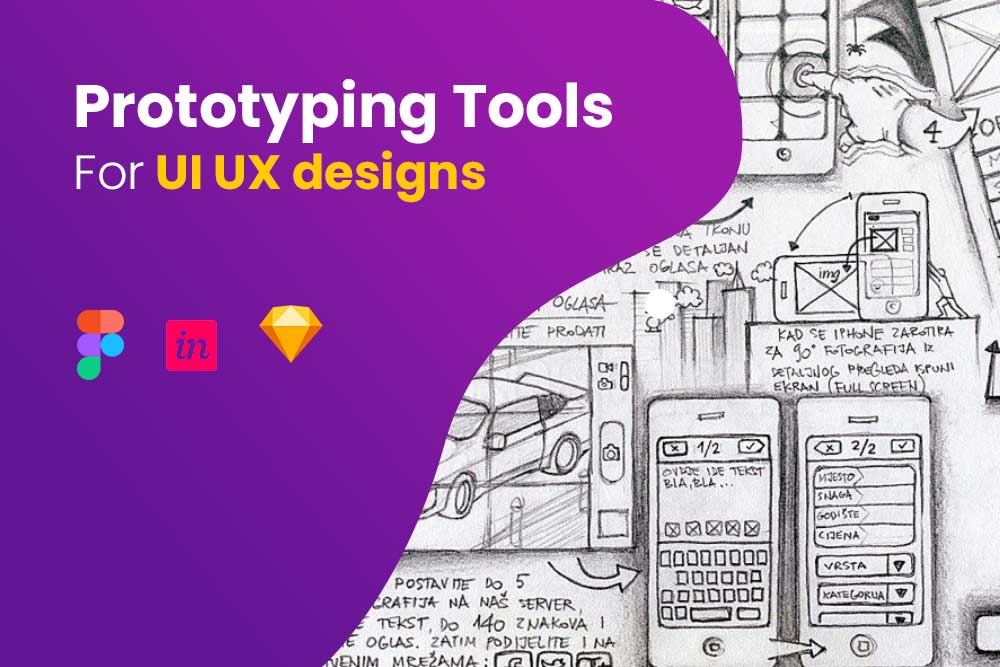 Prototyping in UI UX provides a method to discover new ideas for interface design. It is a process of designing, building, and evaluating interactive software interfaces with emphasis on quick-turnaround usability testing.

Prototyping in UI UX includes creating wireframes, mockups, or prototypes to get user feedback early on the design. These are then tested by stakeholders of the project among other groups who are involved in making decisions about the final product.

The prototyping process is essential because it helps different groups evaluate the solution to be implemented before designing and development starts.

A prototyping tool can be an extension of your existing interface design tools or new one that provides specific functionality needed for prototyping ui ux software interfaces.

Figma is a modern prototyping tool which has a supportive community and a wide range of features. It provides designers with the opportunity to create interactive wireframes and prototypes for mobile, web, or desktop applications.

One of the most important features of this tool is its ability to design mobile apps in collaboration with developers. In fact, it’s built on top of React Native. The main focus of this tool is designing UI and UX for different platforms which makes it a perfect fit for all kinds of apps!

Figma is a prototyping tool that enables teams to make interactive interfaces with drag-and-drop functionality. It supports all major platforms including iOS, Android, and web.

Adobe XD is aimed at helping designers create prototypes from the very beginning of the process. This tool is perfect for rapid prototyping, wireframes, or mockups that need to be tested with users before production begins.

Another thing about this tool is how it allows users to collaborate better because each team member has access to the same design files at all times. Users can also take their work offline whenever they want without needing anyone else’s permission or approval.

Prototyping tools have been around for a while but Adobe XD has taken things up a notch by providing an environment where designers can collaborate and share their work with other teams while still maintaining high-quality visuals.

Sketch is used in various industries such as automotive, entertainment, IoT, healthcare, and more. Sketch has also been integrated with many development tools which allows you to create prototypes for iOS, Android, React Native, web apps and more.

Sketch is a free prototyping tool that is used in UI, ux design. It was developed by the design team at Facebook. Sketch has a clean interface and it allows designers to quickly create, collaborate, and share ideas among their team.

Sketch is an easy to use software that can be used for prototyping of web products, mobile apps, games, etc. It supports filetypes like Photoshop (.psd), Illustrator (.ai), Sketch (.sketch) and HTML/CSS files. The best part about this software is that it has a clean interface which makes it easy for designers to rapidly create new designs without having any difficulty working with the software.

Axure is one such prototyping tool that provides this functionality and has been gaining popularity amongst UX designers across industries like retail, finance, healthcare etc It is a professional tool that can help design a wide range of apps that range from software, business apps, games, websites, etc.

Axure delivers easy-to-use drag-and-drop interface with rich UI components for designing high fidelity prototypes. It also offers the ability to generate the required code for building an app which you can view on your computer or on an iOS or Android device as well as share with your team members.

Invision lets users design interfaces from scratch or from existing assets. It also gives them the freedom to create interactive prototypes that can be used as a guide for other designers.

The Invision UI prototyping tool has a number of powerful features, including a timeline for easy navigation between screens during the early stages of design. This feature allows designers to collaborate more effectively on their work as they can share time-lapse presentations with others in real time.

Justinmind prototyping tool is a cross-platform UI prototyping tool. It provides you with the ability to create and share interactive digital prototypes in minutes without any coding knowledge or experience.

The benefits of using such an AI writing assistant are endless. They help content creators to generate content at scale and make sure that they’re not wasting time on skillsets that they don’t have and instead focus on what they’re best at – creativity and emotions.

Webflow has been growing in popularity, and now has over 100,000 projects on its platform.

The process of designing and building your product should be as quick as possible – save time and money through an efficient workflow with Webflow.

A webflow prototyping tool is a vital part of designing interactive experiences. It helps to create responsive designs for different platforms and screens with the help of user-friendly drag-and-drop interface.

As it’s name implies, webflow is a platform that facilitates design and prototyping. It can be used by designers, developers, marketers, and other stakeholders to create responsive designs for different platforms and screens. There are multiple features that make this tool stand out from its competitors like universal design support, easy export/import capabilities, etc.

Webflow was created by Avi Assia who wanted to accelerate design process for product teams across industries like ecommerce, healthcare, finance, etc.

Mockplus has many features that make it an ideal prototyping solution for UI/UX design workflow. It allows you to design web layouts in minutes without coding or complicated libraries like libraries like jQuery or Bootstrap. It also offers support for all major browsers (IE 10+, Firefox 18+, Chrome 35+) for browser testing right away.