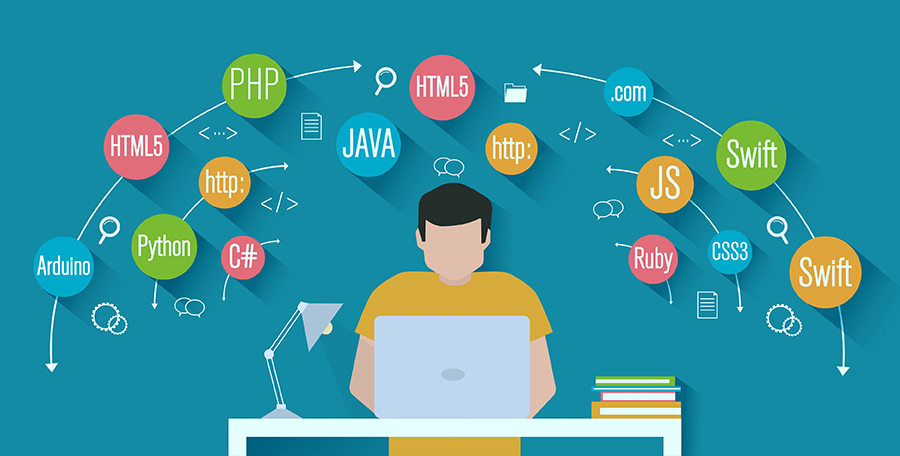 For a bright future in the technological world, one thing that is very essential is an in-depth knowledge about programming languages. Gone are the days when every single thing could be done with the knowledge of only Java and C. In this era, we need the expertise of Object Oriented Languages which can be integrated into can be integrated into any system, be it some data server, websites, or into any product. Since, the entire programming world is developing at an uncanny faster pace, it is important to keep yourself updated with these new languages because, believe it or not, after five years, these new languages will be create cutting edge technologies.

Languages like PHP, JavaScript, Python and so on are on the rise and hence, if you are planning to undergo a web development course in Gurgaon, it is well expected. But, before you take up any course, allow us to make you familiar with some of the best programming languages in 2020 which will make a clear path for your future jobs.

One of the most used programming languages in the entire world is none other than Python. It is the next simple Object Oriented Language than Java and that’s why it has been accepted widely by many organizations, be it service-based or product-based companies. Not only Python is used in backend development but also in automation scripts. So, learning a Python Development Course in Gurgaon is certainly going to be fruitful, provided you are learning every single aspect of the language properly, especially since its object oriented and covers a lot of real-life features.

GITHUB repositories have seen codes written in Python languages more than in JAVA. In the last few years, Python has become the second most popular coding language according to SatckOverflow survey.

GitHub has declared JS to be the most used frontend scripting language for five consecutive years. It has also earned the eleventh position as the best programming language by Stack Overflow Developer survey.

We also offer React Development in Gurgaon where we build react applications for our client. Click here to know more

As you all know PHP is a backend programming language, and hence it runs on interfaces, of which Lavarel is one of the famous frameworks. Lavarel was designed with the sole aim of web application developments and hence it has some advanced features which magnify the uses of the PHP knowledge. With Lavarel framework, you can access different databases at once, and also will have an access to different PHP and advanced PHP tools. So, it’s time to take up a brilliant Laravel Development Course in Gurgaon and Acil Technologies is surely going to help you a lot in it.

TIOBE has marked PHP as the eighth most popular language in 2020. It has earned the title of 8th most used technology as per the survey of StackOverflow Developers.

Magento is a high level programming language which implements several other low level and assembly level languages like PHP, SQL and some important features of the Zend Framework. There are many top countries all around the world that are developing dynamic websites and maintaining them using the Magento codes. So, for learning this newest programming language, immediately take up a proper web development course in Gurgaon

Are you looking for magento store? We have strong portfolio in magento development.

Last but not the least C++ is another most important and rapidly flourishing C programming language in the world. Its concept is quite similar to that of C with the only difference being in its nature. C++ is an OOP language and hence it features polymorphism, data binding, and encapsulation and so on- all of which play an important role in web developments.

In the last few years, C++ has become the sixth most popular coding language according to SatckOverflow survey.

Well, without a doubt JAVA is one of the best programming languages which is being used till date. There are many top MNCs where the backend development is done using the JAVA language. Eclipse and Hackerrank are the two main platforms where codes are being formulated. JAVA is an OOP language and hence it helps the developers to integrate the realistic world in the form of code languages. Learning JAVA through Java development course in Gurgaon doesn’t sound too bad. In fact, it is one of the easiest languages to learn since it is based on objects and classes which provide more flexibility to the programming block. Once you are done with JAVA, you can easily move onto more advanced features of the programming language.

JAVA is gaining popularity with each year, thanks to the flexibility it provides. GitHub has ranked the language as one of the top used languages in popular MNCs.

R language is the basic platform for implementing artificial intelligence and cloud computing techniques. So, if you are intrigued by the latter two, you need to learn the R language clearly. This particular language is used for analytical and statistical studies which are the main part of Ai and cloud computing. If you are looking for jobs having descriptions for coders, data miners and data analysts, then R language will be your perfect choice.

MATLAB is more of a numeral computing language where codes are written in the form of data inputs. This particular programming language is basically used for the study of wave’s functions, trigonometric functions, Z and laplace transformations and so on. So, if you are an electrical or electronic engineer, MATLAB course in Gurgaon will help you to achieve your dream as a coder in top product-based companies. MATLAB is used in converting your analog data inputs in digital wave form and hence it has become a great part of core electronic industry dealing with digital data processing, communications, radar, microwave studies and so on.

Swift can be considered to be the easiest programming languages for beginners and hence, it is being used in many startup companies nowadays. You won’t have to work too hard on declaring the variables, checking the size of the array while giving the inputs or allocating the memory dynamically. The interface used in Swift programming is interactive and hence provides a great deal of flexibility to work on. It is more of a designing platform because you can divide a large programming module into smaller ones, making it efficient in terms of run time and compilation time.

StackOverflow Developers have given Swift language the 12th most used technology rank. PYPL has ranked the language as the 9th most used and popular language.

C is the mother language and is a low level library language which focuses on block programming rather than modular forms. However, having the knowledge of this programming language will help you a lot in easing into the world OOP languages. C follows a lot of syntaxes and hence, it can be a bit difficult to keep track of the programming flow if the code is too complex or long. C incorporates various datatypes like queues, arrays, lists, and even trees. The concepts of these explicit datatypes can be easily understood using the C language and later on you can transform the program into JAVA language also.

It has ruled the programming language market for more than 47 years now and is still ruling.

Now, if you are looking for web development course in Gurgaon and cannot find a suitable institute to do so, reach out to Acil institute. They provide a wide range of different online programming courses, starting from the very basic C programming course to the advanced level of PHP and Python courses too.

If you are looking for Web Development in Gurgaon to build our application or website then we provide website design and development services also.